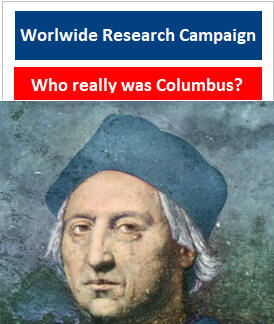 To conduct a comprehensive, complete and non-biased worldwide research and investigation in order to be able to determine or at least assemble the most approximate and solid theory regarding the following questions:

1) Which is the real geographical origin and place of birth of Christopher Colombus?

2) Are his remains located in Santo Domingo or in Sevilla or are they really in both parts? Is there any other place were they could be? In which place do we have the majority and best quality of his remains?

3) Which are the actual most serious theories regarding the geographical origin of Columbus?

4) Who exactly were his parents?

5) Who exactly were his direct descendants?

7) Was his birth name Cristoforo Colombo or Cristobal Colom, etc.?

8) At what age did he die and of what cause and in which year was he born?

9) Did he really have a generalized arthrosis?

10) Which similarities can we find between Italian (Ligurian) "Colombo" families DNA and his DNA?

- No government, politcal groups or parties should interfere with this investigation so it is not subject to political pressures

- Genetic studies and conclusions should be obtained and analysed by different non-biased scientists, from different countries and nationalities. Results should be compared and discussed. DNA should be compared at least with the remains of presumed relatives (born also in the century in which Columbus was born) in Italy, Portugal and Spain. Today's decendants DNA would be extremely unreliable but it is advisable to also have these studies.

- Serious historical theories should all be taken into account and confronted. No theory should be "a priori" discarded.

- Historical theories should be based on historical "forensic" evidence

- Participating historians should not be biased by patriotisms or regionalisms

- Other participating Anthropologists, Biologists and Scientists should also demostrate that they are non-biased.

- Research goals, efforts and results will be directed and coordinated by the Campaign Director